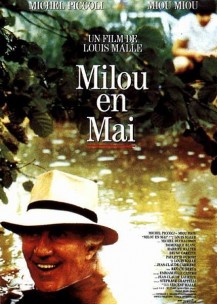 Like Vanya, in Malle's last film, Milou never left the family estate. His mother dies during the May 1968 student uprising in Paris. The brother who is the London correspondent for Le Monde keeps turning up the volume of the radio for the latest news. A deceased sister's interest in the estate is represented by a niece who is an antique dealer, who is most interested in grandmother's emerald ring that Milou's daughter Camille has already slipped on her finger. A non-relative, a truck driver who can't deliver his load of tomatoes in Paris, brings a nephew who was part of the uprising. Everyone is on strike and the matriarch can't be buried.