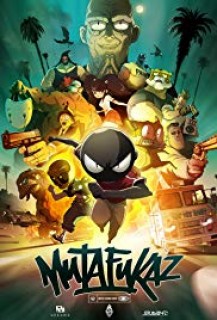 Angelino is just one of thousands of deadbeats living in Dark Meat City. But an otherwise unremarkable scooter accident caused by a beautiful, mysterious stranger is about to transform his life... into a waking nightmare! He starts seeing monstrous forms prowling around all over the city... Is Angelino losing his mind, or could an alien invasion really be happening this quietly...?