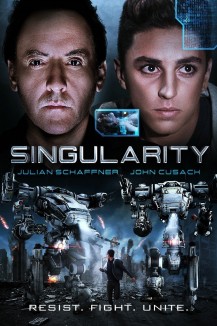 In 2020, Elias van Dorne (John Cusack), CEO of VA Industries, the world's largest robotics company, introduces his most powerful invention--Kronos, a super computer designed to end all wars. When Kronos goes online, it quickly determines that mankind, itself, is the biggest threat to world peace and launches a worldwide robot attack to rid the world of the "infection" of man. Ninety-seven years later, a small band of humans remain alive but on the run from the robot army. A teenage boy, Andrew (Julian Schaffner) and a teenage girl, Calia (Jeannine Wacker), form an unlikely alliance to reach a new world, where it is rumored mankind exists without fear of robot persecution. But does this world actually exist? And will they live long enough to find out?