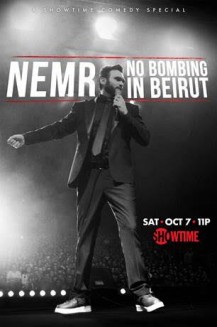 Nemr No Bombing in Beirut

From the man who pioneered stand-up comedy in the Middle East, NEMR: NO BOMBING IN BEIRUT is a unique comedy event like no other, premiering Saturday, October 7 at 11 p.m. ET/PT on SHOWTIME. Filmed both in Lebanon and in the United States, NO BOMBING IN BEIRUT is an hour of uproarious comedy that will leave viewers inspired as they witness the refreshing reality of a world they were told never existed. Journeying from his early days in the U.S. to his later years in Lebanon, Nemr touches on childhood, family, relationships, religion, war and the power of perspective while being able to laugh at our shared experiences. As Nemr explains, "We are at our finest when our paths cross." Watch a first look from NEMR: NO BOMBING IN BEIRUT below!

Born in Beirut and raised in San Diego, Nemr is a comedian who straddles two worlds, nimbly making fun of both. An accomplished comic with seven full-feature specials - including two which garnered a full movie release - he's appeared on the cover of Rolling Stone's Middle East edition, which called him "Smart... Sophisticated... Powerful... and Hilarious." In this entertaining special, Nemr hopes to break down barriers and bring people together through laughter in the U.S. as he did in his homeland.